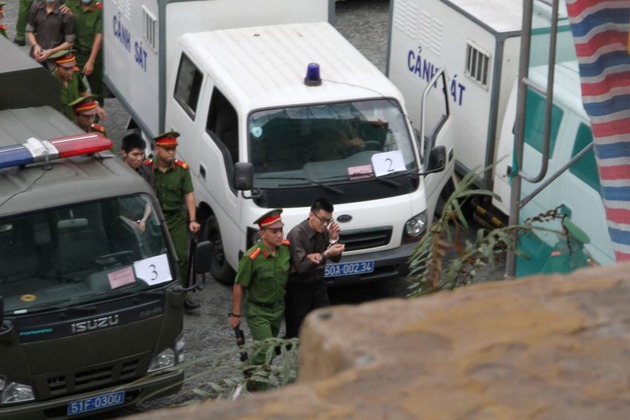 HANOI, VIETNAM - Vietnamese courts have handed down harsh prison sentences to two dozen people after finding them guilty of terrorism and subversion, including in a bombing linked to an exiled group, state media reported Thursday.

A court in Ho Chi Minh City convicted 14 people on a charge of terrorism aimed at opposing the people's administration for a petrol bomb attack at the city's international airport in April and sentenced them to between five and 16 years in prison.

Dang Hoang Thien, who was accused of making two petrol bombs, only one of which exploded, was given 16 years while 13 others received from five to 14 years in prison at the end of the two-day trial Wednesday, state-run Thanh Nien newspaper said.

The bomb caused a scare but no casualties. The perpetrators were linked to the Provisional Central Government of Vietnam, an exiled California-based group of the defeated U.S-backed South Vietnamese republic and considered reactionary by the authorities in Hanoi.

Meanwhile, a court in south-central province of Binh Dinh sentenced nine people to between three and 14 years for attempted subversion and spreading propaganda against the communist state at the one-day trial Wednesday.

They were convicted of printing and distributing leaflets in a village in February, defaming the country's leaders and instigating people to overthrow the government, it said.

Despite sweeping economic reforms over the past three decades that made Vietnam one of the fastest growing economies in the region with booming foreign investment and trade, the communist authorities tolerate no challenge to their one-party rule.