Mattis: US Aircraft Carrier to Visit Vietnam in March 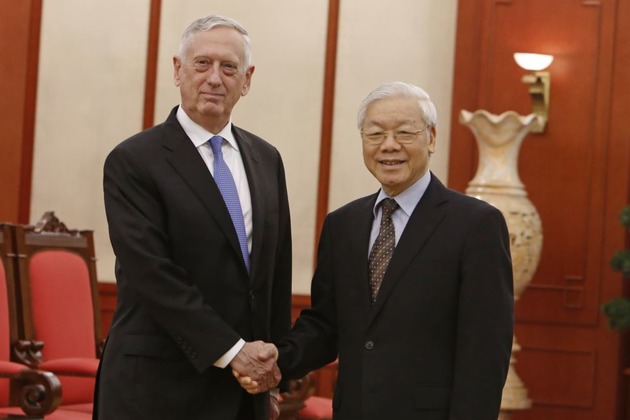 HANOI, VIETNAM - In a move signalling the strengthening of military relations, Defense Secretary Jim Mattis says a U.S. aircraft carrier will visit Vietnam in March, the first by a U.S. Navy carrier since the Vietnam War.

"We thank you for the increasing partnership, with our carrier coming into Danang here in March," Mattis told Vietnam's Communist Party chief, Nguyen Phu Trong, Thursday in Hanoi.

The carrier's visit, the first by a U.S. carrier to a Vietnamese port, was announced by the Pentagon in August and would be a tangible sign of the expanding military cooperation between the former war-time enemies.

"We think it's in America's best interest to see a strong and prosperous and independent Vietnam, and we intend to be a partner as we go forward," Mattis said.

Pentagon officials stress that Vietnam's prime minister, the official head of government, has the final sign off on an aircraft carrier visit, but that the process is moving ahead.

The United States is seeking closer ties with Vietnam, which has become increasingly assertive about standing up to China's disputed territorial claims in the South China Sea.

The U.S. recently transferred a Hamilton-class cutter to Vietnam's Coast Guard. It is now the largest ship in the country's Coast Guard or Navy.

In 2016, Obama lifted a decades-old embargo on U.S. weapons sales to Vietnam. The U.S. currently has 24 active foreign military sales with Vietnam, valued at about $70 million, according to U.S. officials.

Mattis' visit comes days ahead of the 50th anniversary of the Tet Offensive, one of the largest campaigns of the Vietnam conflict, which ended in 1975 when the South Vietnamese capital, Saigon, fell to North Vietnamese communist forces.

Ahead of the visit, Mattis said the U.S.-Vietnam war is "in the past." Now, the Pentagon chief said, U.S.-Vietnam relations are on a "positive trajectory."

"We are creating more trust between our militaries," he added.