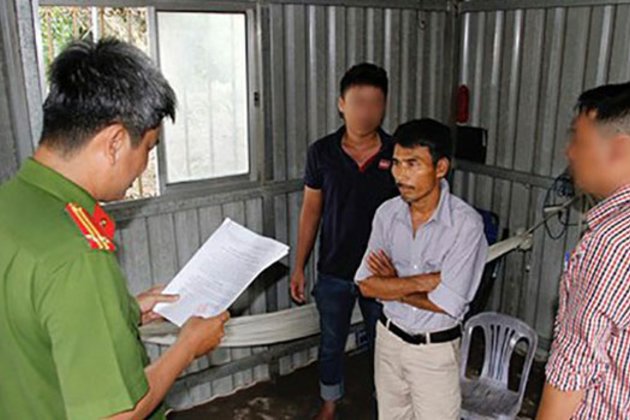 A court in the southern Vietnamese district of Binh Thuy sentenced activist and Facebook commentator Le Minh The to two years in prison for dividing the people from the (Communist) Party, his sister told RFAs Vietnamese Service, calling the sentence too harsh.

Police in Binh Thuy arrested The, 56, a member of pro-democracy group Hien Phap, in October 2018 for his posts on Facebook. They held him incommunicado and charged him with abusing the rights to freedom and democracy to infringe upon the interests of the state, the legitimate rights and interests of organizations and individuals under article 331 of the penal code.

The sentence is too harsh, even the lawyer thinks its unacceptable, Thes sister Le Thi Binh, told RFA by telephone phone after the trial in the Binh Thuy district peoples court in Can Tho city.

First of all, no body sued him. Second of all, he did not disrupt public order. They arrested him when he was driving, she said.

He only talked about what upset him. Nobody could imagine a two-year prison sentence, added Le Thi Binh.

Our neighbors were very shocked to hear this. They thought hes been detained long enough and even in a worst-case scenario, he would only get a suspended sentence, she said.

According to the NGO Vietnam Human Rights Defenders, Thes group, Hien Phap (Constitution) aims to educate the public about the human rights they are entitled to under Vietnams 2013Constitution. Many of its members played key roles in in the mass protest against two bills on Special Economic Zones and Cyber Security in Ho Chi Minh City in mid June 2018, and nearly ten members of the group have been detained and charged since September.

In a March 15 appeal for the release of The and five other prisoners of conscience, Human Rights Watch deputy Asia director Phil Robertson called for pressure on Vietnam to drop the cases against the six and end its persecution of activists peacefully campaigning for democratic rights.

Since Vietnams new cybersecurity law went into effect in January, police have arrested at least three people for dissent after they posted critical comments on Facebook.

In another case of legal retaliation for Facebook posts, police in Bac Ninh detained Nguyen Ba Manh on March 19 for a comment on the social media platform the previous day saying that pork affected with trichinosis worms have been consumed in his village, state media said.

The online state media outlet Tuoi Tre quoted Bac Ninh police as saying they are preparing to prosecute him under the article 288 of the penal code for spreading or using illegal information on the internet.

According to Tuoi Tre, at the police station, Manh admitted that he had spread fake news and took the post down on Monday.

Last week, Vietnamese state media reported that more than 200 children from Bac Ninh have been found out to be infected with trichinosis worms after eating pork provided by a local kindergarten.

Fierce competition between US, China for energy in Central Asia

Beijing [China], August 3 (ANI): As the US has called "for a new alliance of democracies" to counter China's aggressive ...

Here are the latest developments in the coronavirus crisis:The pandemic has killed at least 690 363 people worldwide since it ...

Curfew in Srinagar with immediate effect

Srinagar (Jammu and Kashmir) [India], Aug 3 (ANI): The Srinagar district administration has imposed curfew in view of inputs that ...

One Indian among 8 dead in Nepal landslide

Kathmandu [Nepal], August 3 (ANI): At least eight people, including an Indian national, have died due to a landslide in ...

Business and private jets flying from Israel's Ben-Gurion Airport to the United Arab Emirates are a fairly regular occurrence, although ...

U.S. decision to dump WHO dangerous and irresponsible

Microbes do not recognize borders. We are all safe only when everybody is safe. In a pandemic, to attack the ...