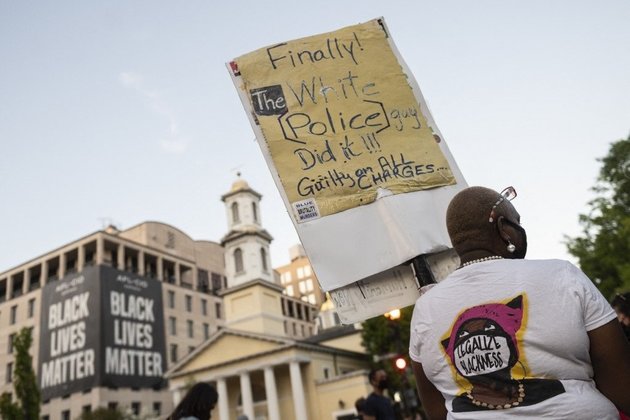 Chauvin, described by colleagues as rigid and silent, knelt on the 46-year-old Floyd's neck for more than nine minutes on a Minneapolis street on 25 May last year, despite the dying man's pleas and those of shocked passers-by who filmed the tragedy.

The killing sent reverberations throughout the United States and the world, and launched a reckoning on racial injustice in America.

The guilty verdict amounts to one of the most high-profile, high-stakes US court results in decades.

Chauvin's lawyer Eric Nelson has said his client "exuded a calm and professional demeanor" in his interactions with Floyd, and sought to convince the jury that the white ex-cop only applied a hold that was authorized and consistent with his training.

But the prosecution argued, successfully, that Chauvin had used excessive force - not only with Floyd, but with others he arrested during his 19-year career on the force.

"This wasn't policing, this was murder," Schleicher said.

Prosecutors called several police officers to testify to Chauvin's excessive use of force against Floyd. Charles McMillan was one of the witnesses who testified in the Derek Chauvin trial. (Stephen Maturen/Getty Images via AFP)

They included the Minneapolis police chief Medaria Arradondo, who said Chauvin's actions violated the department's training policies and its "values."

Chauvin, 44, had the opportunity to testify in his own defense, but he declined, invoking his Fifth Amendment right against self-incrimination.

He did attend every day of the trial, however, dressed in a suit and often taking notes on a yellow legal pad.

Barry Brodd, a retired police officer who is a use-of-force expert, was among those who testified for the defense.

"I felt that Derek Chauvin was justified, was acting with objective reasonableness, following Minneapolis Police Department policy and current standards of law enforcement in his interactions with Mr Floyd," Brodd said.

People who have interacted with Chauvin over the years have said he used more force than necessary in applying restraining holds.

Prior to the trial the prosecution dug up several examples of his "modus operandi," including the case of Zoya Code, a young black woman arrested by Chauvin in 2017.

"Even though the female was not physically resisting in any way, Chauvin kneeled on her body, using his body weight to pin her to the ground," the prosecution said.

"He just stayed on my neck," she recently told the Marshall Project. Frustrated and upset, she challenged him to press harder. "Then he did. Just to shut me up," she said."

Andre Balian, a kung fu instructor who trained with Chauvin some 20 years ago, said there was "no perceivable way" that Chauvin was unaware of the damage he did or was capable of doing in situations like the one where he knelt on Floyd's neck.

In an interview with AFP last June he recalled Chauvin as a "jerk" who would stand with arms folded and glare at those around him.

Since the Floyd killing, few details have filtered out about Chauvin.

But former colleagues have sketched a portrait of a silent, rigid, workaholic who often patrolled the city's more difficult neighborhoods.

His commitment to the job earned him four medals over the course of his career. But he also racked up 22 internal complaints and investigations, according to a public record scrubbed of all details.

Only one of these numerous complaints, filed by a white woman whom he had violently pulled from her car in 2007 for speeding, in front of her crying infant, was followed by a letter of reprimand.

On week nights, Chauvin had long worked security at a nightclub, the Nuevo Rodeo. There too, his heavy-handed methods left a bitter aftertaste.

The club's former owner, Maya Santamaria, described him to reporters as someone man who "had a real short fuse," and who made generous use of tear gas at the slightest provocation.

A loner at work, Chauvin had a wife, a refugee from Laos whom he married in 2010. Last May, Kelly Xing filed for divorce.

A court opened a tax fraud lawsuit against the couple and, in November, a judge rejected a divorce settlement that called for all their assets to be transferred to Xing.

That arrangement would have sheltered the funds if Chauvin was ordered to pay significant damages.

Last month the city of Minneapolis settled a wrongful death lawsuit filed by the Floyd family, agreeing to pay his relatives $27 million for the killing by Chauvin.