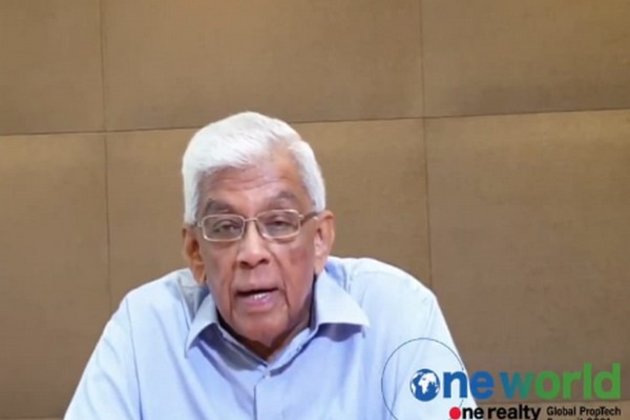 New Delhi [India], April 22 (ANI): Despite the Covid-19 pandemic, a sudden surge in housing sales is the result of a structural demand, HDFC Chairman Deepak Parekh said on Thursday.

"I firmly believe that the demand for housing is not pent up demand, it is structural demand and that is here to stay," he said while speaking at One World One Realty Global PropTech Summit 2021.

"In my 44 years of working in the housing sector, I have to say that the strong demand that one has seen for housing in the recent period has certainly surprised."Parekh said the growth in home loans has been aided by low interest rates, softer or stable property prices and continued fiscal benefits on home loans.

At the same time, technology has enabled developers to virtually showcase their properties and home loan providers have leveraged digital platforms to continue to serve new and existing customers.

Parekh said that demand for housing sector is coming from first-time home buyers, customers moving up the property ladder by shifting to larger homes or acquiring a second home in another location and with the work from home option.

The proximity to one's workplace is perhaps less compelling, so there are wider options in terms of locations when buying a home.

Talking about broader global economy, Parekh said that after a massive contraction in global GDP due to outbreak of pandemic in 2020, countries across the world are getting back into recovery mode. There has been a massive increase in liquidity by all major central banks.

Part of this large liquidity has resulted in rising global stock markets. Governments across the world are conscious that they have to safeguard against any build-up of asset bubbles, said Parekh.

"That is why governments in several countries are focusing on increasing investments in real assets. Building infrastructure is one way to ensure a sustained recovery without spiralling inflation. Building infrastructure also creates a massive number of jobs and has multiplier effects on the economy."Parekh said India's latest Budget too bets big on growth. India sees the benefits of a construction led recovery, which is why the infrastructure outlay in the Budget is at an all-time high. So clearly, construction and real estate development are going to play a key role in all major global economies.

Highlighting the role of technology, Parekh said that innovation is becoming extremely important. India has been at the forefront of not only adopting technology but also has a large talent pool as far as IT and entrepreneurship is concerned.

"There is so much talk about fin-tech, health-tech, edu-tech, reg-tech but property technology or prop-tech is still in its infancy. The construction industry is one of the least digitalised sectors in the world. It is estimated that the real estate sector spends less than 1.5 per cent of its revenue on tech."Capitalising on technology for the real estate sector will improve governance, said Parekh. One would tend to agree that availability of real time data on real estate is hardly ever available. Progress of projects can be monitored through digital dashboards with data driving key decisions.

"Funding for projects based on achieving construction milestones can be better monitored online. This will bring in the much needed transparency and accountability and improve cost efficiencies in the sector."New-age technologies being developed like drones, 3D printing, robotics, augmented and virtual reality -- all have immense applications across real estate business platforms, said Parekh. "We will continue to explore prop-tech investment opportunities that have close synergies with affordable housing."Earlier, Minister for Housing and Urban Affairs Hardeep Puri also highlighted the use of technology in real estate sector.

He said that Global Housing Technology Challenge (GHTC-India), which was launched by Prime Minister Narendra Modi on January 1 is an example of the country's commitment to sustainable development.

"This is a programme harnessing global expertise on use of new construction techniques and green technologies in constructing houses in lesser time-frames than those with other conventional technologies."Puri said these Lighthouse projects (as they are called) will come up in six geo-climatic zones in the country and will pave there use to mainstream. "I would urge all participants of this summit to play an active role in propagating the use of new technologies." (ANI)