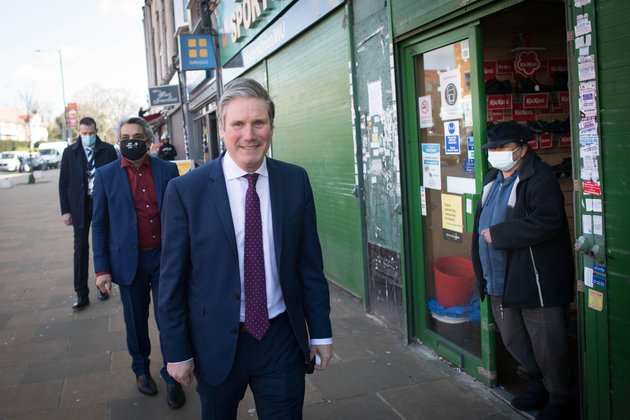 Keir Starmer recently celebrated his first year as leader of the Labour party. His critics believe the party is failing to advance very far under Starmer's influence.

Writing in the New Statesman, the political philosopher John Gray claimed that the Labour leader epitomises the contemporary party's fundamental weaknesses and characterised Starmer as a cosmopolitan liberal lawyer out of touch with the sentiments of non-metropolitan England. This is underlined by his previous support for a second referendum on European Union (EU) membership.

Meanwhile, many on the party's left insist that Starmer is jettisoning the very economic policies that allowed Labour to project a renewed radicalism, coming close to winning the 2017 general election. There also appears to be a frustration at Labour's apparent inability to provide a more potent challenge to the ruling Conservative party. And that is perhaps inevitably being directed at Starmer himself.

A survey carried out for the Mile End Institute at Queen Mary University of London sought to examine perceptions of Labour and Starmer among Londoners. The capital is viewed as a key barometer in UK politics as it is now widely regarded as Labour's English heartland. Much of the party's electoral support is concentrated there rather than in the north of England.

Even so, according to our survey, almost half of Londoners believe that Labour is a divided party. Other widely held views are that the party is incompetent (27%) and old-fashioned (18%). Only 3% of voters in the capital think that Labour is "united" and likely to "keep its promises" in government.

While recent polls confirm that London mayor Sadiq Khan is on course for victory in the forthcoming election, the results suggest that Londoners' perceptions of the party are broadly similar to those across the rest of the UK.

A year into his leadership, Londoners are divided on how well Starmer is doing. The survey showed 38% believe he is doing well while 38% think he is doing badly. Middle-class and black, Asian and multi-ethnic (BAME) voters are more likely to rate Starmer positively.

It is striking that the Labour leader's favourability rating is somewhat higher among voters over the age of 50. This reverses the position under Jeremy Corbyn, when Labour was perceived to perform particularly strongly among those under 35.

The polling indicates that Starmer is viewed by the London electorate as honest (18%), socially liberal (15%) and a leader who "sticks to what he believes" (14%). Yet relatively few in the capital believe Starmer is "comfortable with Britain's past" (7%), charismatic (7%) or patriotic (4%).

Almost a third of respondents (31%) said they did not know what his qualities were. This indicates that the pandemic has hindered Starmer's ability to project himself effectively to the British public.

When asked about his main weakness, almost a quarter of Londoners believe he is unable to stand up effectively to Boris Johnson (23%). In handling the pandemic, 34% of London voters believe Starmer has done well, yet 39% think he has performed badly.

The Labour leader has faced an inescapable dilemma since March 2020. He has been required to support the government at a time of national emergency, while making cogent criticisms of the Johnson administration's perceived mis-steps during the public health crisis.

For some voters, Starmer has spent too much time carping from the side-lines. For others, he has failed to hold the government to account adequately given the disproportionately high death rate the UK has endured.

More generally, voters perceive Starmer to be closest to the middle-class, London and the EU, while he is viewed as distant from working-class Britons and their institutions, notably the trade unions. With Starmer as leader, the image of the party as "extreme" and "left-wing" has less salience than it did under his predecessor. However, our survey indicates that criticisms of the Labour party as failing to relate effectively to "red wall", Brexit-leaning voters in northern England have resonance, even with London voters.

Although Khan and Labour are likely to perform well in the capital in the forthcoming elections, the party's success is unlikely to offer a tailor-made strategy to be pursued nationally if Labour is to win a general election. Over the last five years, Khan has been highly successful in constructing an insurgent "progressive alliance" by uniting the centre-left vote in the capital. The evidence suggests that many voters who normally support the Liberal Democrats or the Greens in general elections will give him their support in the mayoral poll.

It is argued that within London, Khan and Labour can afford to forego the support of socially conservative voters who once dominated the outer suburbs. It is striking that the current mayor has been criticised for his "liberal" stance on law and order, recently proposing a commission to examine the decriminalisation of cannabis.

Yet to win a general election nationally, Labour requires a broad-based political appeal that will attract the support of those who voted Conservative, and voted SNP in Scotland, in 2019 and 2017. That means focusing on the core issue of economic competence amid declining living standards, alongside the quality of public services after the decade of austerity.

There will need to be a new approach to social issues given the salience of rising inequality, and the fraught politics of law and order. The challenges Starmer's party faces nationally remain formidable.

On May 10 2021, the Mile End Institute will be joined by a panel of experts for the online event "Keir Starmer's Leadership: One Year On". Register here or contact mei@qmul.ac.uk for more information.